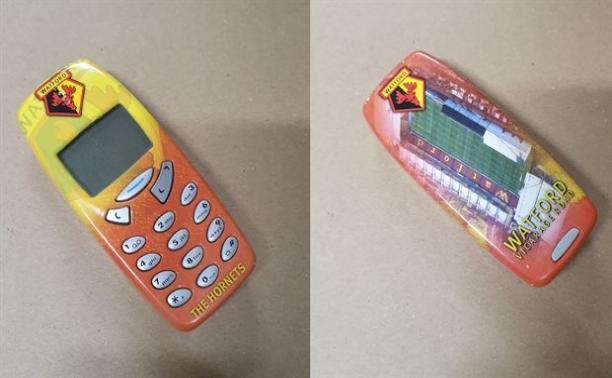 Watford Museum is excited to announce that a Watford FC adorned mobile phone from early noughties has been shortlisted for Hertfordshire Museum Object of the Year 2023...

Over the next month, residents can vote for their favourite object nominated by Hertfordshire’s fantastic museums to win the Object of the Year Award. Staff and volunteers at Watford Museum chose the Nokia 3310, which features the football club logo and ‘The Hornets’ on the front, and an aerial view of Vicarage Road Stadium on the back.

The object was recently included in the museum’s Watford Centenary exhibition, which celebrated 100 years of the town being a chartered borough, and when explaining why it was chosen for this awards category, the team said: “This piece of 2000’s nostalgia provides an amazing modern juxtaposition to the commemoration of Watford becoming a chartered borough in 1922.”

Focusing on the role Watford FC has in the community, the team also said: “The club is an essential part of the town’s identity, and they also celebrated a centenary last year, with the team playing at Vicarage Road Stadium for over 100 years. This object encapsulates the two centenaries into one unconventional, off-the-wall object. The phone itself is a reminder of how times have changed since the town became a borough whilst also offering a unique way to show support to the football team.”

Elected Mayor of Watford, Peter Taylor said: “Watford Museum has a great number of objects which show the real life experience of those who have lived in this area over time. At the heart of our community for over a century, Watford FC has a place in the memories of thousands and thousands of residents and this phone shows the importance of the club to local people. The staff and volunteers at Watford Museum do a tremendous job and they deserved to be recognised with this award.”

You can vote for the Watford FC mobile phone to win Hertfordshire Museum Object of the Year at hertfordshiremuseums.org.uk/object-of-the-year-2023.aspx . Voting closes on 19 February 2023.