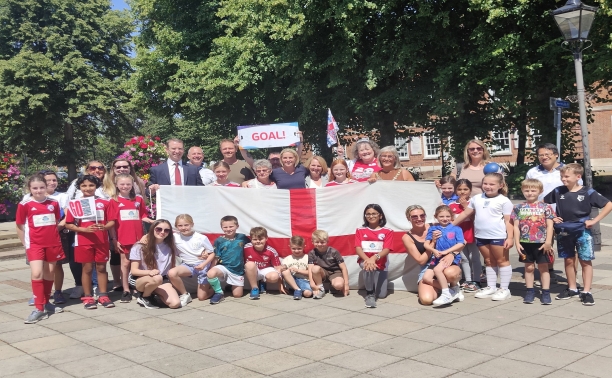 Elected Mayor of Watford, Peter Taylor and legendary footballer, Kelly Smith came together with members of the Watford community to support England's Lionesses.

Today Elected Mayor of Watford, Peter Taylor, legendary Watford-born footballer and past England captain and all-time top goal scorer, Kelly Smith, and possible future Lionesses’ from the local LGDA under 12s girls team raised the England flag outside Watford Town Hall. They were also joined by members of the community who wanted to share their excitement and support of the team.

The flag has been raised in honour of England’s Lionesses who have made it to the UEFA Women’s Euro Final. They will face Germany’s national women’s team on Sunday 31 July at 5pm (UK Time).

Mayor of Watford said: “My family has loved watching England’s success in the Euros. I know that our town and country could not be prouder of our Lionesses and all they have achieved so far. The England team has done so much to bring women’s football into its well-deserved place in the spotlight. I hope everyone tunes in on Sunday to show their support and to cheer on this fantastic team!

Sport England research shows a huge difference in the number of men and women regularly playing sport and being physically active in the country – two million fewer women. I’m glad that Watford are offering opportunities for more women to get active and have fun in a supportive environment via our Watford Get Active Programme. You can find out more at https://www.watfordgetactive.co.uk/”