The Deputy Mayor of Watford, Aga Dychton helped raise the Armed Forces flag this week at County Hall (21 June 2022), to show appreciation of the work of serviceman past and present...

The flag was raised with dignitaries from all the council's within Hertfordshire, as part of Armed Forces Week (20 June to 25 June), the annual national campaign that gives everyone the opportunity to show their support for the men and women of the Armed Forces past and present, including currently serving troops, service families, Reservists, veterans and cadets.

The event also marked 10 years since the first Hertfordshire Armed Forces Covenant was signed, with Aga also adding her signature to the Covenant to signal Watford Borough Council's continued commitment to the Armed Forces community in Hertfordshire.

Deputy Mayor of Watford, Aga Dychton said: "I want to say on behalf of Watford as a town and its people, to all of our veterans, service personnel, reserves and their families, whether you are at home or overseas, thank you for all that you do. There is pride in our town for those who are serving in our armed forces and respect for our veterans. I was proud to raise the flag at County Hall on behalf of Watford to mark Armed Forces Week. It's so important to care for our armed forces personnel, who have sacrificed so much to keep us safe at home and abroad."

The UK Armed Forces defend the country and its interests. Every day of the year they are busy working around the world, promoting peace, delivering aid, tackling drug smugglers and providing security and fighting terrorism. For more information, visit www.armedforcesday.org.uk 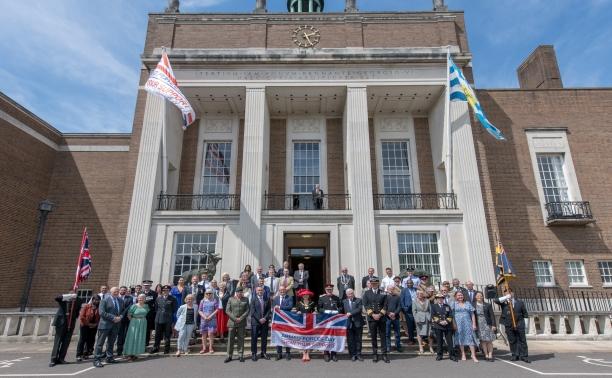