Improvements to Meriden Park get underway 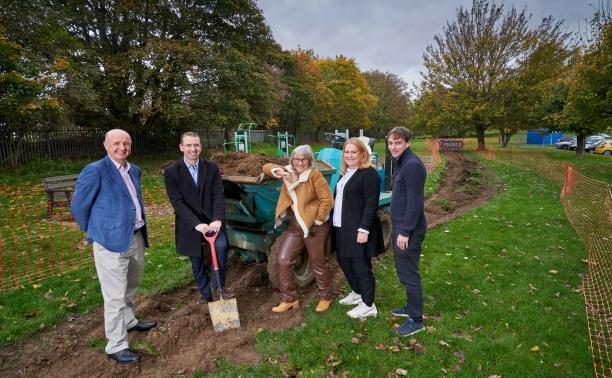 Meriden Park is undergoing a series of park and access improvements including delivery of biodiversity benefits, as part of the council’s ongoing work to enhance parks and open spaces across the town

Following feedback from residents earlier this year, initial works to Meriden Park include an improved and extended footpath around the whole park. The spoil from the footpath will then be used to lay the foundations for the landscaping mounds. These will need time to settle before they are planted with grass seed and fully landscaped, which is estimated to start in spring 2023.

Works will also include the installation of a height restriction barrier at the entrance to the Meriden Community centre, and knee high railing to the boundary of Meriden Way and Garsmouth Way. These barriers will act as a deterrent of illegal encampment on the site, whilst protecting the character of the park and the enjoyment for local residents. To increase accessibility in and around the park, a number of dropped kerbs along Garsmouth Way will also be installed.

During spring 2023, more trees will be planted to add to Watford’s tree canopy (currently 18.2%, which is higher than the national average of 16%), as well as a new wildflower meadow and more benches for seating and picnics. As well as making the park even more beautiful, these initiatives will support biodiversity, and improve the soil, climate and the environment.

There will be an opportunity for the community to assist with bulb and tree planting, so please contact parkconsultation@watford.gov.uk if you are interested. Local residents and park visitors will also be invited to become a part of the programme by establishing a Friends of Meriden Park volunteer group.

Elected Mayor of Watford, Peter Taylor, said: “I promised in my manifesto that I would invest in improvements to Meriden Park, so I am delighted that we have started this work. This is part of our ongoing commitment to keep improving parks and green spaces in Watford for all residents to enjoy. It will also provide plenty of opportunities to get active, have fun and make the most of the great parks we have here in Watford.”

Cllr Tim Williams, Portfolio Holder for Parks and Sustainability, said: “The local councillors in Meriden worked really hard to make this a reality, and have held a number of local public consultation sessions. We are committed to make sure we have fantastic parks and green spaces, and that work will continue with investment like this. It’s also great to see the biodiversity improvements taking place, which will no doubt help with people’s mental and physical wellbeing, as well as wildlife.”

17 of Watford's parks and greenspaces have been awarded Green Flag status, an award given to the best parks in the country. You can find out more about Watford’s open spaces at www.watford.gov.uk/parks